Sergei Romanov is an anarchist from Gomel, who was released from the penitentiary in summer 2019. Before that we had not written about his case at the request of Sergei himself, he saw no point in revealing his data and details of the case. 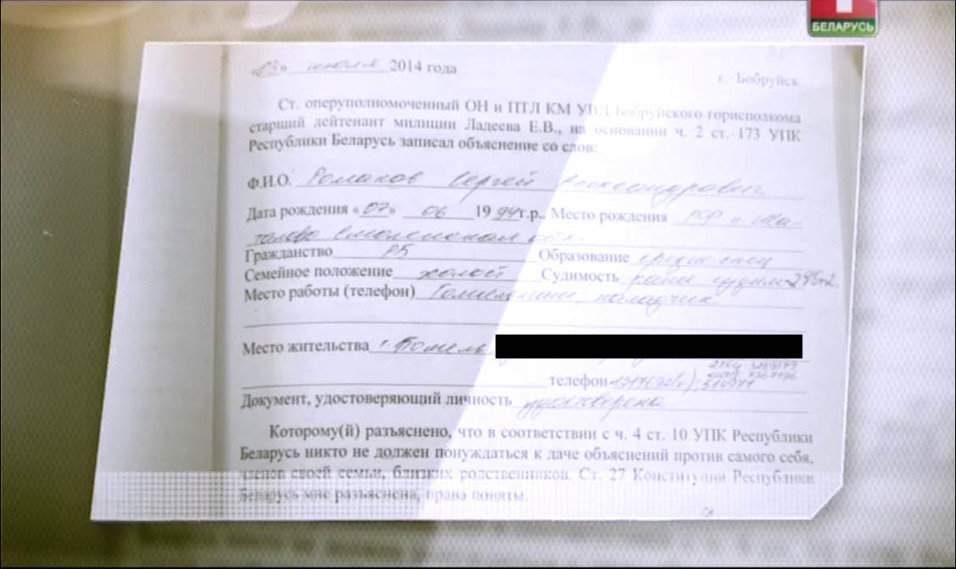 For many years Sergei was constantly persecuted by law enforcement agencies for his political beliefs and civic position, and since there are few politically active people in the town, they would come for Romanov after any incident. For example, back in 2011, when anarchists in Homel claimed responsibility for setting fire to a billboard with police propaganda, Sergei was searched and summoned for questioning in an attempt to pin the case on him. Before the local council election in 2014, Romanov was detained and fined for damaging propaganda (according to the police, Romanov was sticking “Anarchic People’s Program” over posters). Whenever he was detained, he refused to testify and did not enter into a dialogue with representatives of the authorities.

In 2013, Romanov received his first criminal record for possession of 14 grams of gun powder at home. He was prosecuted under Article 295.2 and sentenced to two years in prison with a suspended sentence. In July 2014, Romanov was hitchhiking to Minsk region to take part in a camping trip, the car in which he was traveling was stopped by traffic police in the town of Babruisk and Romanov was brought to the police station. In Romanov’s backpack they found some bags, which, he said, he had found on a fishing trip near the Sozh River and decided to take with him. He didn’t know what was inside, he thought it was some illegal substances and was going to give them to the police voluntarily, hoping that this way the rest of the time in the first case could be taken off him. The handed out items were recorded in the report as voluntarily handed over, they were sent for examination. Romanov was released on condition of not leaving home. A few days later he was again hitchhiking towards Minsk, where he was detained by the same traffic policemen who said that the bags contained explosives. A case under Art. 295.3 was filed and Romanov was sentenced to 5 years in prison. After the complaints, one year was taken off the sentence. He was serving a sentence in IR-2 prison camp in Babruisk, where after the social protests, held in all regions of the country at that time and after the TV report, where it was mentioned that Romanov, according to the authors of the film, was on his way to Minsk to commit a terrorist attack, for unjustified reasons he was placed on the preventive account, as “prone to extremism and other destructive activities, “After the fictitious materials about Romanov’s violation of the internal regulations, the colony recertified himself into a “malicious violator of the regime of detention,” also Romanov was subjected to covert forms of repression through the placement in a punishment cell, frequent searches of personal belongings, deterioration of detention conditions, and provocations by the administration-controlled convicts. For the last year and a half he served at the IK-15, where before his release by the court of the October district of Magilov town he was assigned preventive surveillance for one year.  Romanov disagrees with the court decision and considers it unjust.

Thus, the authorities themselves gave the conclusion a political character.

Romanov was released in July 2019, the court prohibited him to leave the city and change his place of residence, he also received a ban on visiting bars, restaurants, shops and other places where they sell alcohol, the ban to leave the place of residence between 22:00 and 6:00 without a valid reason, the obligation to note once a week in the inspectorate.

The first violation Romanov received on September 15, as he was not at home at 3 a.m. when the inspectors arrived with the inspection. He admitted his guilt and served 5 days. December 6, Romanov went out of his flat after 10 p.m. with the intention to go outside and call an ambulance, as he felt ill and his blood pressure rose. There he met his neighbors, and while he was talking to them for a short time, he suddenly saw on the stairs with a police major with a camera on his phone, who recorded that Romanov was a few meters from the apartment, which was later classified as a serious violation of supervision. Upon the arrival of the ambulance Romanov was diagnosed with a hypertensive crisis, injected and taken to hospital, but hospitalization was denied because he was better. For this violation Romanov pleaded not guilty and served 14 days, now this decision is appealed. On 23 February 2020 Romanov received a third violation for being in a cafe. The fact that they sold alcohol there was not visible due to the large number of visitors, including women with children, and the purpose of visiting the cafe was not to consume alcohol. Romanov is an absolutely non-drinking man, and that day he and a friend went into the cafe for a coffee and shelter from the rain, when 5-10 minutes later a policeman from the criminal investigation in the company of 4 special force officers came to the cafe and took Romanov to the department of the Interior Ministry.

Sergei refused to say or sign anything, but he is sure that despite the insignificance of the violations very soon he will be charged with a new criminal case under Article 421 of the Criminal Code (Failure to comply with the requirements of preventive oversight), for which he may be arrested or sent to prison for up to 1 year. It is not a fact that after serving his sentence under Article 421 of the Criminal Code Romanov will not be released with another term of preventive surveillance, during which fictitious violations will appear again.

Taking into account such a quick reaction to the slightest violation of the supervision regime, which is considered by the court one-sidedly, we can conclude that the cops are inexorably watching Romanov and intend to “neutralize” him again just in case before the upcoming elections and their repressive actions are politically motivated not less than the desire to receive material benefits and bonuses and improve statistics on the work done.

We call for solidarity with Sergey Romanov and ask comrades over the world share this information!